F is for Fin Whale 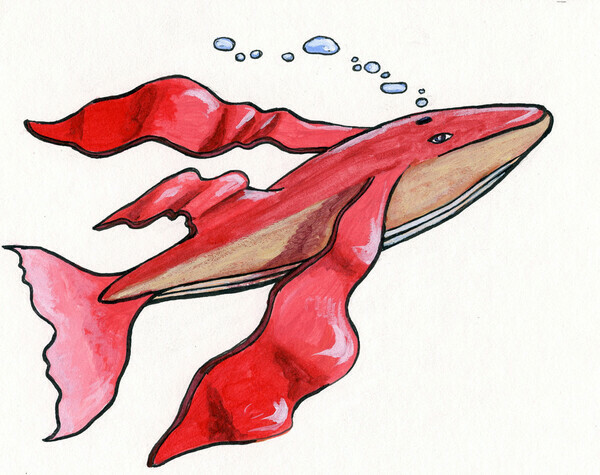 Which is more important, decoration or function.

It is a question that has plagued artist for years and I recently heard a Haida artist, Tejas Collison, talking about art as reflecting life. There was no word for art in his native tongue. The distinction between art and craft is non-existent. Both are important and both can be creative in their production.

Personally I think it comes down to the creativity of the individual and the purpose for creating the work. Function isn’t really a concern of art but it is a concern if it was made for a purpose. A Shaker quote encapsulates this conflict nicely. “Don’t make something unless it is both necessary and useful (functional); but if it is both necessary and useful, don’t hesitate to make it beautiful (decorative).” The fin whale illustrates the decorative at the expense of function, where the fins are so long and floppy they become more decorative than functional.

There have been movements  or artists who have sought to combine function with decoration. Groups  such as the Bauhaus furniture design, or Art Nouveau. The understanding of craft is often associated with the products of these movements but the lines are blurred and the term Art can easily be applied.

A modern artist who was known for his decorative work was Matisse. Due to advancing age and deteriorating health he took the technique of cut outs from quality coloured paper. Originally it was a technique he had used as a compositional aid and he made them into his finished work. Some of his earlier work reflected this direction but he made it into a decorative method for producing art.

You can look him up on Google or YouTube where there are some videos explaining his art.

E is for Elephant Seal 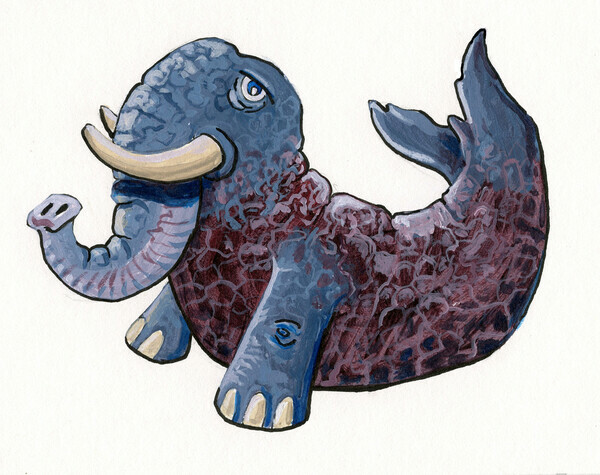 I’ve always been fascinated by seals and sea lions but I know they are the bane of commercial fishers’ lives. I mostly thought in romantic terms and I idealized them.
It was on the news that I saw footage of sea lions entering commercial nets containing salmon. The nets were high enough to keep the fish in but not to keep the sea lions out and they feasted on the salmon while the fishers stood helplessly by.  Those log booms and rocks where sea lions congregated suddenly became staging areas for a marauding host.
It’s interesting that what seems normal and beautiful to one group is the opposite to another. We can look with eyes that see beauty or a species at risk while another group looks at the loss of a way of life.

This conflict reminds me of the work of an artist, Alex Colville, whose work has been labelled magical realism. He was from the east coast of Canada and his artwork that is particularly impressive is the Horse and Train, from1954. In it a dark horse runs between some tracks towards an oncoming train. It is impressive because the beauty and majesty of the horse is going to lose to the mechanization of the train. It could point to the conflict of the change over from horse powered energy to the machine age or could be more personal and deal with the fear of someone we know who is on a path to self destruction. The horse, like the person we know, just needs to step off the track to be safe. They don’t, or won't, and instead are headed towards tragedy.

D is for Dogfish 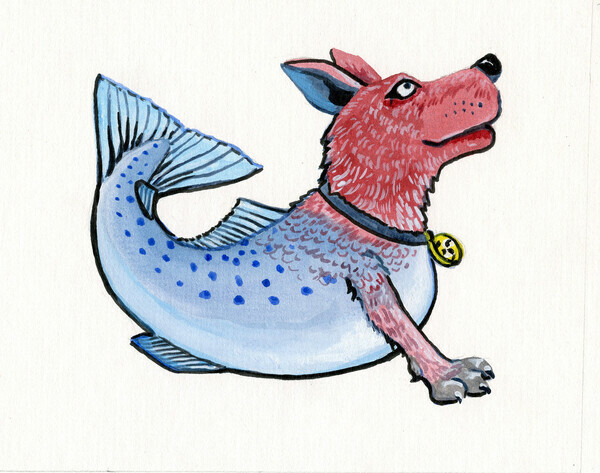 My family spent some days in Campbell River, my birth place, and our friend, Tim Dorsay, arranged for my son Peter and I to go out in a small boat with a local. Our host realized that most of the other boats were chasing the salmon at an island out across the water, too  great a distance for his little boat.
He decided to let Peter fish for cod etc at a drop off closer to shore, saying he’d move if nothing hit after thirty seconds. I couldn’t believe what I was hearing, but sure enough on his first jig Peter hooked into a reasonably sized rock cod. We played catch and release for the first few fish and then Peter hooked into something big. It took him awhile to bring the leviathan up but nothing could have prepared us for what was to come.
“That’s a shark” I said as the fish swam slowly towards the surface in big lazy circles. “It’s a dogfish”, our guide said, “Probably an old one judging by his size.”
We managed to unhook him and returned him to the deep. I’ve seen other dogfish but never one that big.

Someone who lives in Campbell River is Sonny Assu. Sonny was a former student at North Delta Secondary and he went on to Kwantlen College and Emily Carr College of Art and Design. He now works independently as an artist and has/had work in the Vancouver Art Gallery, the Museum of Anthropology, and various galleries around Vancouver and Montreal.

He was commissioned by Art Starts to produce a student interpretation with a First Nations design and he chose to work with students from North Delta. It was a great boost for my students to work with an established artist. 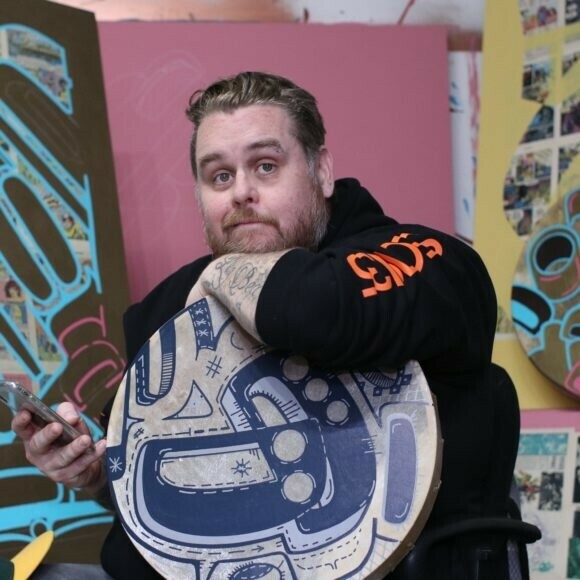 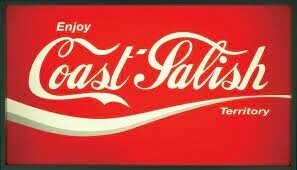 C is for Chum Salmon 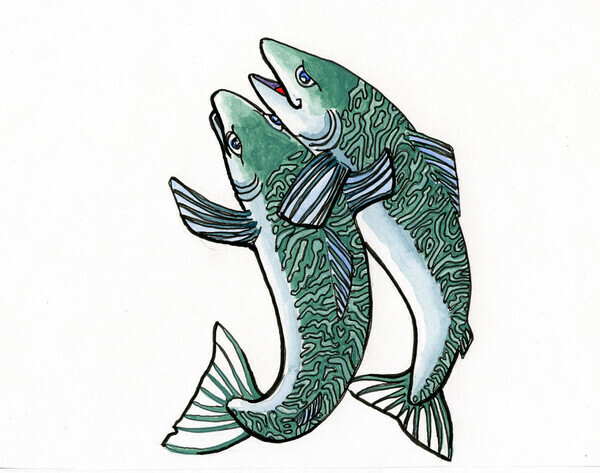 What is something “chummy” that lives in the waters of British Columbia? Why—chum salmon, of course!

When I taught art in high schools I included art history and the work of other artists. One artist I found fascinating was Shaun Tan from Australia. His work is a cross between children’s books and graphic novels. There were certain images that stuck with me long after I had closed the covers.
One of those images was his take on depression, or as he says “the darkness overcomes you”, in his book The Red Tree.
I’m used to the idea of a dark cloud which follows the person around and only rains on them, a stereotypical representation. Shaun, on the other hand, worked with a giant grouper and although it floated above the person it has one of the saddest looks I have ever seen. It persisted in my memory because it was unique and it captured my own imagination. It gave me freedom to see depression differently as something outside of circumstances that can hover over a person despite what they do.

"B" is for Bull Trout

I love fly fishing and and I fished for bull trout on the Skagit River with my friend Bruce Holbrook. We didn’t see any fish the day we went as the water was running high and fast so we ended up in a smaller stream. I was fishing below a bridge when I felt a strange sensation on my hat. It took awhile but I finally found that Bruce was the cause of the tapping. He would reach over the edge of the bridge with his long rod, tap, then disappear before I checked above.

When I was thinking of the bull trout I imagined a fish’s body with the head of a bull, hence the cartoon. This required some research, though, as I pictured the bull in my imagination but I wanted to make sure that the ears were horizontal rather than vertical. I often do research to confirm details such as these for the illustrations.

An artist who I encourage you to look at is Wayne (Bruce) Turner, the photographer. Wayne has focused on images that are found in industrialized cities or in nature and he collects these images for later exploration in terms of adjusting them through Photoshop and printing. He has photographed dried out plants and pushed them to create beautiful vignettes with high contrast. He has also gathered images of structures from cities and emphasized the patterns they create or he has worked with landscapes and the human form. He is also a great Jazz aficionado.
Website: Wayne Turner

“A” is for Abalone 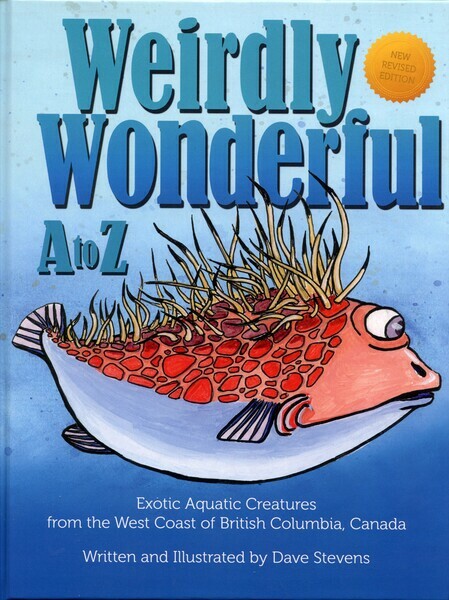 Weirdly Wonderful was the first book of three alphabet collections for creatures connected to British Columbia, Canada. This one dealt with aquatic creatures.

"A" was the first image and I automatically thought that someone hearing “abalone” for the first time would associate it with what they knew. For most of us this would be a “baloney sandwich”, so the abalone shell became the bread for a baloney sandwich.
What’s a sandwich without mustard and lettuce as well?
I used acrylic paints on illustration board for the images. After the colours were laid down I used black ink for outlining and to add definition. 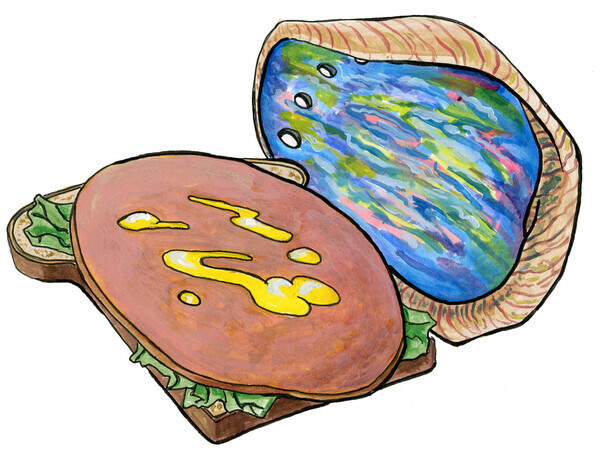 The earliest images were done on Denman Island where Diane, my wife, was attending a writing workshop for the        week.
I was recovering from knee surgery and the place we stayed, Tutu's Bed and Breakfast, was located overlooking one of the lakes on the island. I swam every day to strengthen my knee. Luckily I was far enough along that I was able to drive as well and after dropping Diane off I would head out to explore the island before working on the book and my knee.