G is for Goose Barnacle 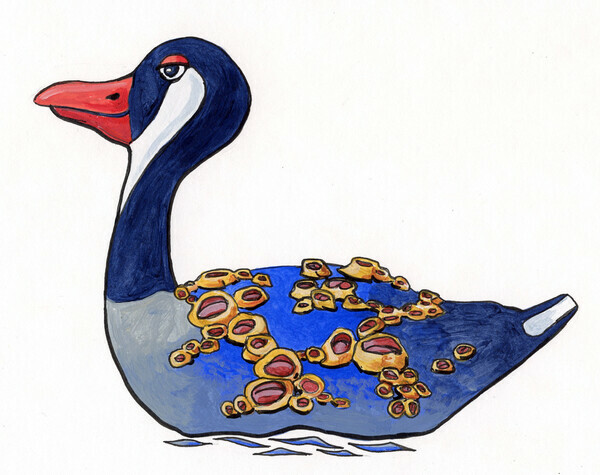 We often think in terms of what we know and it can influence our understanding of the world.
A goose barnacle is named after a bird that can also float and paddle along the top of the water.
We see geese near pounds in Stanley Park, in marshes or in open fields.

I enjoyed sharing space with them but they were often indiscriminate in where they deposited their droppings. When we played rugby on some of those fields we often came away with cuts and bruises but we had to add infections from the geese droppings.

Joe Fafard is from the Prairies of Canada. He grew up on a farm and most of his sculptural work is influenced by animals and people that he saw daily. Cows, horses and characters made up the bulk of his work. One piece I always enjoyed was his tribute to Emily Carr and her animals on the street outside of a gallery on Granville St around 8th Ave. (It has now moved the Emily Carr University of Art and Design on 1st Ave.)
His work has been widely recognized nationally and he was represented at the Canada House at the Expo in Vancouver. He has worked in clay, concrete, steel and bronze. He has also been an artist and a teacher for local youths and college age students.
Joe Fafard (web page)